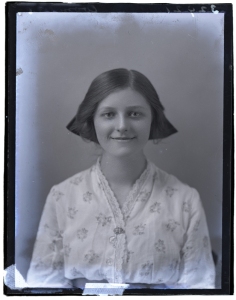 For the fashion-conscious Edwardian and post-Edwardian lady there could be no better opportunity to showcase one’s wardrobe than in a professional photographic portrait. The Knights-Whittome collection is rich with female portraits, it is the largest single category group that we have encountered so far in the digitisation process. Among these images we have a large number of head and shoulder portraits displaying neat simple hairstyles and dress and can only assume that many of these were taken as tokens from working or lower class women and girls to their men or family members serving at the Front. More elaborate three quarter or full length images appear to have been reserved for more affluent or elaborately dressed clients. Some of these portraits are staged with artificial props such as plinths, walls, balustrades, chairs & benches and also usually contain sketchy painted backdrops – we know from records that Knights-Whittome had a selection of around eight of these – but his favourites crop up again and again,  usually either a wooded glade or a bay of ornate windows suggesting a drawing room setting.

The range of poses among these ladies is wide. Some are self consciously posed, displaying their finery. Women stand or appear seated on chairs and benches, some lean over a faux balcony or wall or gaze into the middle distance. Others sit simply and look directly at the camera with a quiet confidence. Across the board there is without exception an attention to the detail of their appearance. Hair is always neat and the clothes they have chosen however plain or ornate are clearly their best.

The portraits we have in the collection span the period which the Sutton and Epsom shops were open, from around 1905 up until around 1917, and so reflect and supersede the Edwardian period (ending 1910). This was clearly a period of immense change, spanning as it did, both World War One and the huge rise in interest in the women’s emancipation movement. The French named the era from 1895 to 1914 ‘La Belle Époque’ and it was marked by an attitude of privilege for the very few. The attitudes and lifestyles of this period were swept away by World War One which left in its wake a new socialism and increased sense of personal identity & individuality. Along with greater equality across genders and class lines, there was a greater flexibility in fashion and the conventions which historically surrounded it. While elaborate and luxurious fabrics and dress still had its place, it was reserved more for formal events and occasions than for everyday wear. It is worth noting that while the majority of Knights-Whittome’s clients were working and middle class, he was also lucky enough to have also been able to photograph some Royalty and some society events.

In the main the studio portraits we have in the archive are of local people, photographed in their Sunday best but nevertheless, these images still reflect the changes in trends and fashions across this period. Jayne Shrimpton provides an excellent guide to period fashion & dress in her book ‘Family Portraits & How to Date Them‘.  From this guide, we have been able to recognise many of the trends which dominated the Edwardian and Pre-War/WW1 period. In today’s post, some descriptions taken from Chapters six and seven of Shrimpton’s book are matched loosely with images from the Knights-Whittome glass plate archive in order to give a flavour of the diversity of the collection.  We must bear in mind that the dates we have for the plates are not necessarily the dates of photography, but rather that of orders placed.  In addition there is always of course, some crossover in fashions and trends from one period to the next.  This post is intended more to offer a selection of the material in the archive than as a historical documentary on the period.

Among our earliest female portraits, dating approximately between 1906-1909 we have noticed a strong preference for the classic Edwardian aesthetic;  “The sinuous curves of the prevailing art nouveau aesthetic line influence dress for much of the Edwardian period…. Skirts were fluted in shape, to fit smoothly over the hips before flaring out into a sweeping, floor-length hemline. One-piece dresses remained a formal daytime option but more practical separate blouses and tailored skirts were becoming increasingly common for everyday wear.” 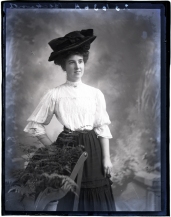 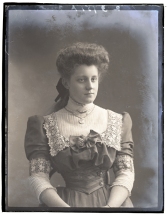 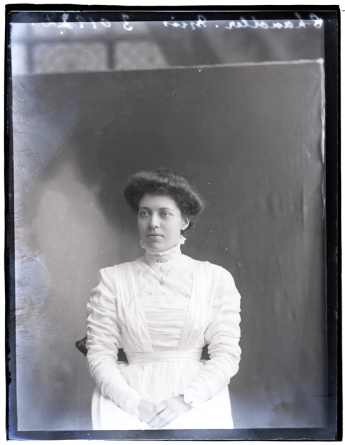 “Necklines were always worn very high….Day dresses were formal and elaborate….Vast hats ornamented with flowers, ribbons, lace and feathers were essential accessories throughout the decade….Edwardian hairstyles were characteristically wide and full, being puffed out and drawn up, often over pads or a framed, or eked out with artificial hair. The built up hair often featured a centre parting from c.1907. ”

But there is also evidence of the growing interest in the women’s emancipation movement, especially in the portraits we have of younger women, who displayed their political views in the clothes they chose to wear; “The stylish ‘tailor-made’ costume…which comprised a tailored, masculine-style jacket and matching skirt…became the  virtual ‘uniform’ of the so-called ‘New Woman’, the forward-looking woman who, typically, went out to work, pursued outdoor activities such as cycling and walking, and enjoyed increasing social independence. ” 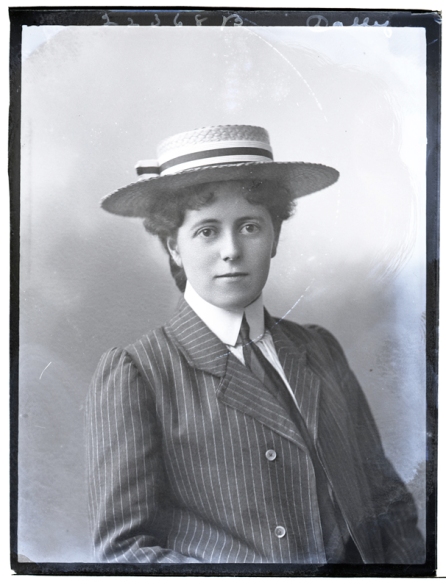 It was a time of diversity. Alongside this new more masculine trend room remained for a more conservative, enduring feminine fashion. “Edwardian women were, nevertheless, expected to exude a sense of feminine elegance. Formal blouses presented a confection of lace, frills and flounces, made with full, puffed fronts which emphasised the bust.”This trend for frilled blouses appears to have been a universal one. Beautiful embellished blouses were not just reserved for the aristocracy but were worn by every class. Home dressmakers did their best to emulate the fussy blouses and used fine pin tucks, embroidery, appliqué, lace and pleating to achieve the effect. Among the plates in the collection we can see a range of examples ranging from the very simple to the very elaborate. 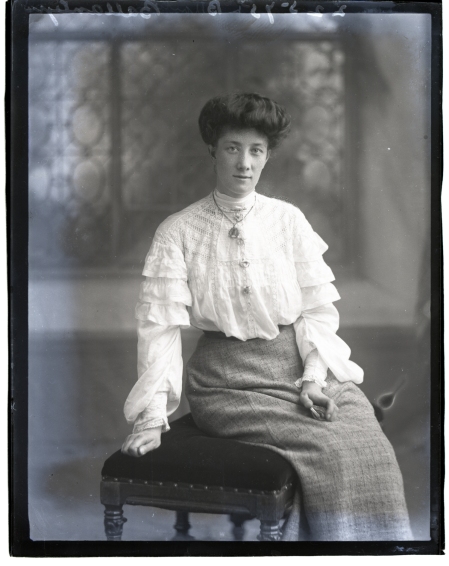 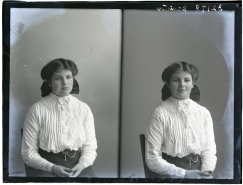 Post 1910 portraits were often more relaxed than those from the Victorian and Edwardian periods.  Women begin to offer more direct and confident expressions and poses were frequently quite self-consciously relaxed. Women’s dress underwent a transition to a less fussy, more uncluttered slender line, and there was a more marked distinction between everyday working wear and luxury evening wear. The blouses and tailored skirts worn in keeping with increased calls for women’s emancipation generally gave women a more smart business-like appearance and the high necked restricting blouses of earlier times gradually gave way to more relaxed styles with a v neckline or open collar. “Generally, lower, V-shaped or rounded or more open necklines feature on blouses from 1911 onwards….” 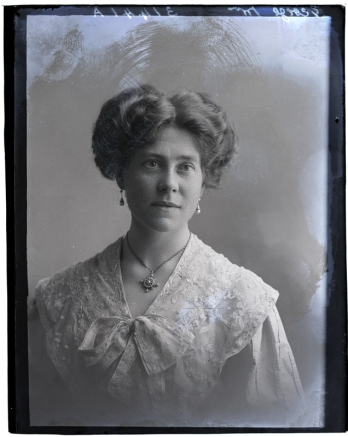 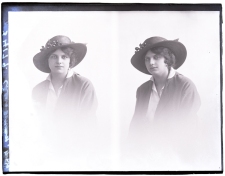 “The raised, puffed out hairstyles of the Edwardian period persisted until around 1912, and usually featured a centre parting. By c.1913 smoother more natural styles dressed closer to the head and, worn with a neat chignon behind, were more common… In 1915 women’s dress took a dramatic turn, becoming more traditionally feminine, even romantic in style – in order, it is often claimed, that women should appear more attractive to men returning from the Front. The new silhouette which prevailed until 1918/1919,  was characterised by a skirt which flared out from a narrow waist into a much fuller hemline ending several inches above the ankle… Hairstyles became softer again and various shapes of fashionable hats were worn, a wide-brimmed, shallow-crowned style being most popular between c.1917 and 1919.”

Among our plates there is a huge bias towards the war years. We do not know the exact reasons why Knights-Whittome left his photography career behind but certainly a drop-off in demand in the frugal post-war years may be a factor. His move into public service, eventually becoming the Mayor of St Albans could indicate a possible change in values from this period, but could this move have been precipitated by the dwindling need for portrait photography in the area? Certainly, we have far fewer late (1916 onwards) portraits. We also must bear in mind that so far, we have only digitised the quarter plates; the smallest and therefore most economical of the formats. Among the larger plates we know that we have a number of weddings and house parties but we anticipate further portraits, most probably of his more affluent clientele. Who knows what sartorial treasures may be hiding among the material we have yet to uncover?