Today’s post is written by our volunteer Elizabeth, who was inspired to research 4 plates titled ‘baby Sparenborg’, and unravel the lost story of a British family with German origins, living in England during WW1. It is often impossible to tell how the sitters came to have their photographs taken, and this is a key example of a family caught up in WW1, yet taking time out at Whittome’s studio. These photographs of a young Margot Sparenborg, capture a moment of peace for a family that faced particular conflicts during WW1.  Thank you to Elizabeth for bringing to light the Sparenborgs and what may have happened to them.

On August 5th, 1914 the Aliens Restrictions Act was passed by Parliament requiring foreign nationals to register with the police – this Act was mainly aimed at German nationals in Britain and meant that they could be interned or deported. Restrictions were placed on travel and the types of goods that could be exported or imported.  At that time a British-born woman who married an ‘alien’ took on their nationality and many British women suddenly found that they, too, were classified as ‘enemy aliens’ – although few were interned. 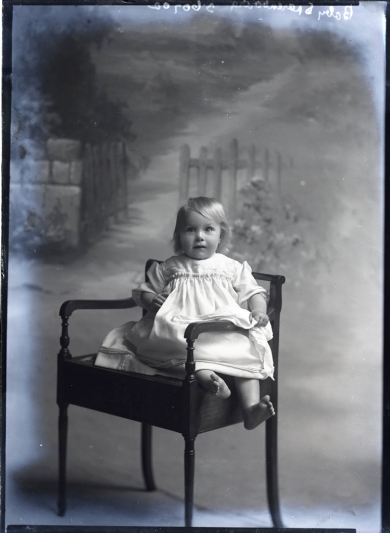 These photographs are probably of Margot W. Sparenborg, who was born between July and September 1914, and were taken a year later in November 1915.  Her mother, Dora Sparenborg, had been born in British India in 1879, but her father, Gerhard, was German. Dora’s family lived in Calcutta for several years until they returned to England in the 1880s. Dora’s father, Johann Lubbo Sparenborg, was a chemical merchant who continued trading with, and travelling, to India.  By 1911 he had bought a large house– Winsome –on Peak’s Hill, Purley. Now widowed, he lived with his youngest daughter Winifred, a housekeeper, a cook and a parlour maid.  Dora’s two brothers, Hans Robert and Johann Adolph, had already left home. 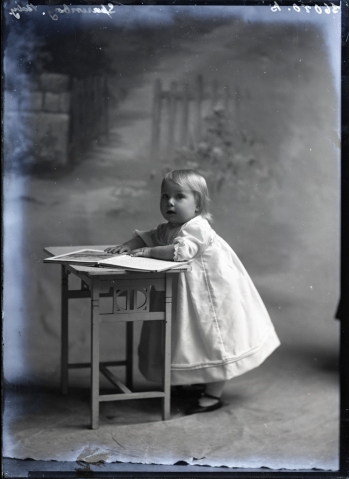 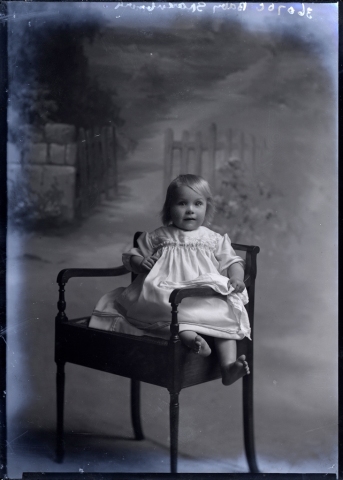 Dora worked as a clerk in her father’s business which is probably where she met her future husband – Gerhard – who was also a chemical merchant working at times in India. They married in 1901, and by 1907 they were living in a rented cottage on Plough Lane, Purley.  Their first child, Doreen, was born in 1903, and by 1911 they were wealthy enough to have a governess for Doreen, a cook and a house maid. Margot was born in the summer of 1914 into a comfortable home with relatives nearby to cherish her.

Dora’s family considered themselves British – although they were only first generation.  It is likely that they spoke German at home, but in 1906 her father had applied for naturalisation and became a British citizen. Dora’s older brother, Hans, joined the British Army in 1900 and saw action in West Africa with the King’s Own Royal Lancaster Regiment. He was promoted quickly and by 1911 he was married with one son and living in Ulverston in Cumbria. At the outbreak of war he was based at Dover and his regiment was one of the first to leave for France. They arrived on August 23rd, 1914, and immediately were in action at Harcourt, near Le Cateau.  Three days later 50 men were killed in action – including Hans.  He was initially declared ‘missing in action’ until April 1915 when his death was confirmed. Margot’s safe world had shifted. Her grandfather, as a naturalised British citizen, was safe from arrest or internment. His son had died honourably in action so perhaps he did not experience any anti-German sentiments.  But what of Margot’s father?  And her mother – married to a German and now considered an enemy alien?

Gerhard was a German national – although he had the right to vote appearing on the electoral roll until 1915. It is likely that these lists were slightly out of date as it is does not seem possible that Gerhard could continue to travel and work as before.  There is no record of him in the UK after 1915 – so it is possible that he was interned and then returned to Germany after the war.  But his name does not appear on any internment lists (although these are incomplete) and if he went to Germany at the beginning of the war then he would have been expected to enlist.   His name does not appear in German military records – although lots of other Sparenborgs are listed. There is no record, either, of his wife and two daughters after the war.  What happened to them?

One possibility is that they, along with other Germans, went to the Netherlands which was neutral during the First World War – there are many records with similar names.  Or they could have gone to the United States – Dora’s younger sister is registered as travelling many times to different part of America – but that does not mean that she was visiting her sister and nieces.  Dora’s brother also visited New York in 1919 – was he visiting his sister?  But there is no record of the family travelling there, or living in the United States – although there were many other Sparenborgs.

Gerhard was a merchant in chemicals – did he, instead, contribute to the British war effort with the supply of chemicals for the new weapons that were being developed?  Was he given a new identity?  Did the family change their name?  Dora’s father, her brother and her sister continued to live in England – but where was Dora? 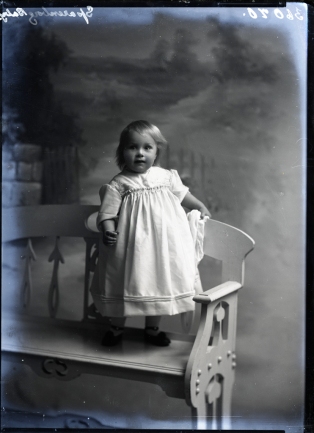 These photographs show a happy and healthy little girl – she cannot be aware of the anxiety and conflict surrounding her about the war. The sinking of the Lusitania in May 1915 increased anti-German feeling – did the family feel that they had to leave England? Why did her mother take her daughter to be photographed in November?  Was Gerhard in an internment camp? Were the photographs for relatives in England or Germany?  Was the family about to leave England? And why wasn’t Doreen photographed as well? The fate of Baby Margot and her family is left unknown…

7 thoughts on “‘Baby Sparenborg’, an enemy alien in WW1 Britain?”