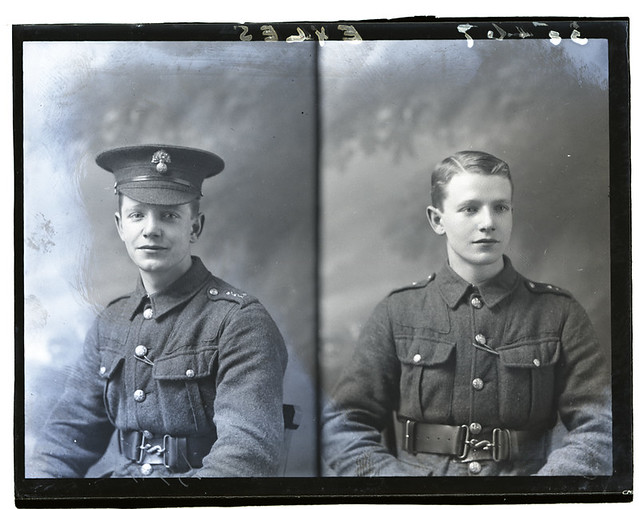 For many decades, the Knights-Whittome glass plate collection lay untouched in the basement of first a Sutton High Street shop, and then later, the Sutton library. An initial survey of the material revealed that the collection contained a large number of military portraits, as you would expect from a collection spanning 1904-1918, but we had no real idea of the extent of this element until work began in 2014 to bring this collection back into the light of day. Initial work into researching a WW1 exhibition in November 2014 prompted archives staff to cross check the lists of names from local war memorials against the alphabetised plates in the collection.  There were a number of matches, and it became evident quite quickly that the collection also contained a huge number of soldiers who were not found in these lists. As we began to work our way through the soldiers documented in the collection we realised that while some were local men who had survived, there were also a huge number of soldiers from the University & Public Schools Battalions (UPS) and other battalions who had been posted nearby – largely at the Woodcote camp in Epsom – and who must have taken the opportunity to use Knights-Whittome’s services while there.

During WW1 local high street photographers were responsible for thousands of photographic postcards or cartes de visites that were sent by soldiers, sweethearts and families to loved ones during overseas postings. The Knights-Whittome collection is a prime example of this business boom. We cannot be cynical about the financial success this brought such photographers. Responding to the demand of young men who wanted their picture taken before leaving England for the Western Front and elsewhere kept such photographers busy and met a real need among families and communities divided by war. The dates of plates in the Knights-Whittome collection testify that Knights-Whittome photographed more than his fair share of soldiers;  frequently in large batches over one day. Knights-Whittome was an enterprising businessman. An advertisement placed in local Epsom newspapers from 1914 offered a twenty percent discount to those in uniform who attended his studio for a photographic appointment.

The images we have in the Knights-Whittome collection show us not only proud new conscripts in 1914/15 and later joiners from 1916 onwards, but a number of medical personnel and a surprising amount of girls and women and children dressed in their Sunday best. We can only imagine that these were taken as treasured momentoes to be carried or sent along with loved ones away from home. These images were printed directly from a negative onto photographic card often with a ‘postcard’ back. Each image was printed by hand and usually in small numbers.

A large part of the project, alongside the digitisation of these images, is the identification and research of the sitters therein. Many of the portraits we have are close-up head and shoulder or torso shots, and these offer us a number of details which can help in the identification of the individuals photographed. Some of the portraits show cap badges which offer information about a soldier’s regiment,  or his shoulder title which did the same (see photo below of Harold Mims who is wearing the cap badge of the 5th (City of London) Battalion, London Rifle Brigade). Other details may include Overseas Service Chevrons on the right cuff – one for each year served; Wound stripe on lower left sleeve, one stripe for each wound received; Rank indicators on the upper arm.  Lance-corporals, corporals and sergeants for example had one, two or three stripes respectively. Other clues such as trade and proficiency badges –  of which there were many – would indicate a soldiers expertise or speciality. A man wearing a bandolier or spurs for example, would usually indicate his involvement with horses, perhaps in the cavalry or as an artillery driver.

So far on this blog we have covered a good number of soldiers from the collection and over the last few weeks we have tried to diversify the subjects of our weekly posts, but in this week, as we commemorate the Armistice once again, it seems appropriate to commemorate another soldier from the collection.  Private Mims was a local lad, who died fighting for his country at a tragically young age.  Working with these plates and seeing the legions of proud, young faces stack up as we add more week on week to our online gallery is a humbling experience.  After close to a century being hidden in a basement we are glad that we are able to give voice to these heroes once more.

Harold enlisted as a private in the 5th (City of London) Battalion (London Rifle Brigade). This was the same regiment as Jack Widdicombe (see Jack’s War Letters blog) but unlike Jack, Harold did not embark for France until the 24 January 1915 (see Medal Card below). We know very little of his personal movements from then but on the 25 October 1916 he was commissioned a 2nd Lieutenant (on probation) in the 4th Battalion, Dorset Regiment and was promoted to Lieutenant just over three months later.

Harold was killed in action on the 27 September 1918, age 22. He is buried in Sains-Les-Marquion British Cemetery and commemorated on the Sutton War Memorial.

Sources used:
Ancestry for the 1901 and 1911 censuses and his Harold’s Medal Card
Commonwealth War Graves Commission (CWGC) for details of Harold’s death and burial

One thought on “Photographic Portraits of a Lost Generation”